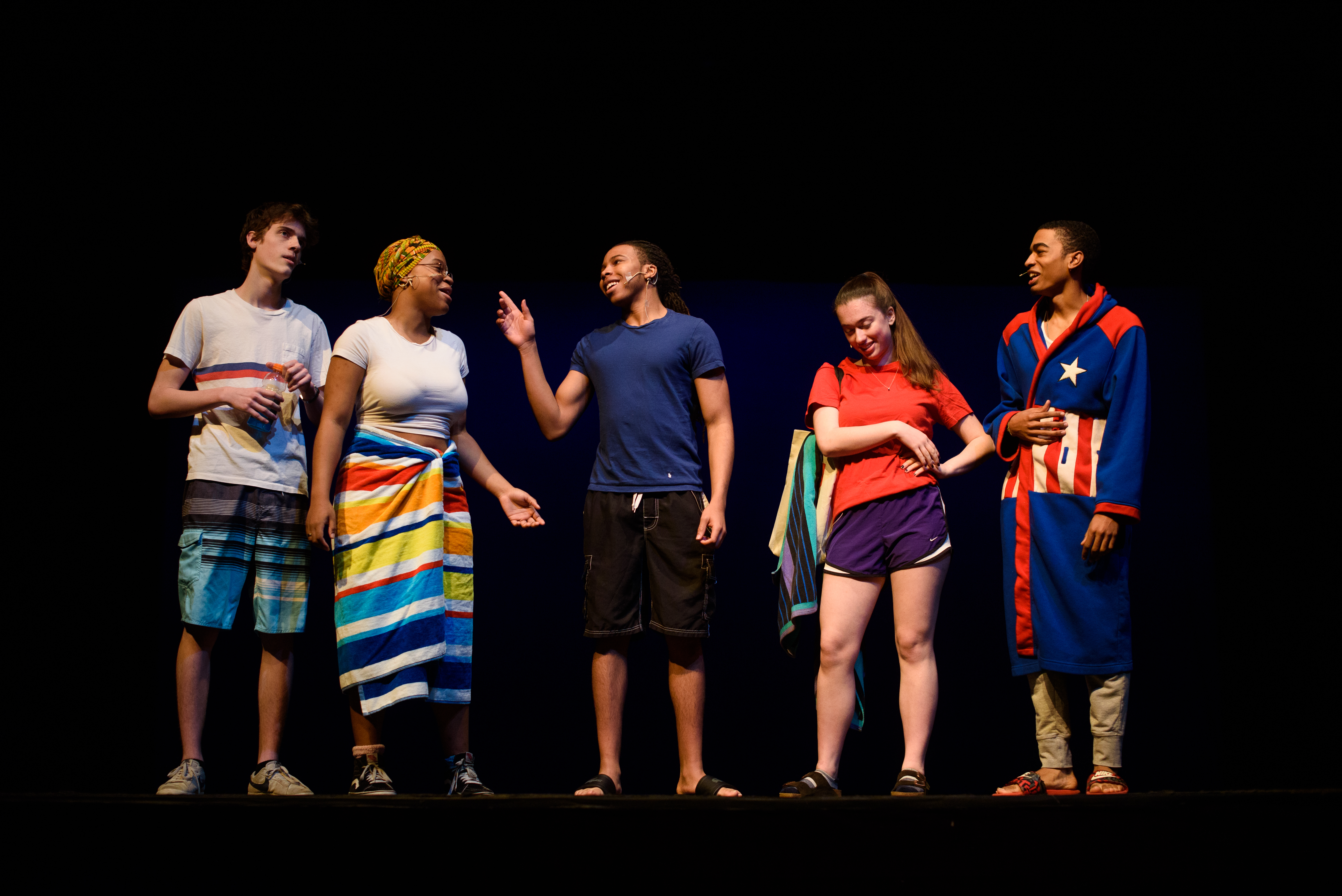 Introduction to Acting:  The work in this studio includes the development of a personal warm-up, basic focus and concentration exercises, observation and transformation process, and a seminar on the history of the acting profession.

The Acting Process:  In this course, you’ll be introduced to ways of making personal, artistic choices in the preparation of exercises and scenes. The tools of analysis, experimentation, and intuition are emphasized.  You’ll learn how to observe others’ work and give constructive feedback.  You’ll also read and discuss a major work on the technique of acting.

Theatre Games:  Theatre Games uses exercise, improvisations, and games to introduce or reinforce existing theatrical skills. You will work solo or in groups and pairs. The emphasis is on experiential learning. Many acting skills are introduced and reinforced, though imagination, concentration, and function are overall themes and form the two major pillars of the work.  Additionally, developing ensemble skills and ensemble building are primary goals of the class.

Characterization: This course builds upon the work begun in Acting I. A variety of exercises are used to explore an actor’s internal and external work in a role. With emphasis on the actor’s relationship to the text, the course culminates in a scene study project.

Scene Study and Monologue: In the first semester, you’ll rehearse and present a scene from a contemporary work of dramatic literature.  Emphasis is on clarity, creativity, and personal connection to the text. The second semester is devoted to the preparation of monologues from a variety of plays.

Physical Character: You will learn techniques in using the body to define character given the varied demands of texts and genres, including:  mime, clown, and period movement styles.

Scene Writing and Performance: First semester. You’ll learn the essential elements of playwriting by writing and crafting an original 10-minute scene. Selected scenes are rehearsed and presented to the public.

Acting in Shakespeare: Second semester. You will be introduced to the challenges of performing Shakespeare and explore the ways that a contemporary actor can respond truthfully to the text that uses heightened language and deals with times and places very different than our own.

Scene Lab: You’ll explore dramatic structure through improvised scene study and text work. You’ll learn how to examine the internal construction of a scene from the point of view of character motivation and action.

Rehearsal & Performance: This advanced level scene study and characterization course leads to rehearsal and performance of a play in the fall and spring of each year. The course is designed to allow students to put their individual process into practice during rehearsal and to ultimately bring the work to audiences.

Audition Studio: This course focuses on the preparation of audition monologues suitable for college or conservatory after graduation. You’ll work on the selection and rehearsal of appropriate material, audition protocol, and the interview process.

You’ll develop a knowledge of movement as art for understanding personal movement preferences and for character development.  Movement experiences and discussions will increase your awareness of the body as an instrument of expression. Movement for Actors will provide an improved physical awareness and coordination, breath control, concentration, and general body conditioning, as the foundation for character embodiment. The class will focus on physical integration in scene work as the year progresses.

Story and Movement:  Skills developed in this course include: storytelling using a range of texts from world literature and diverse cultural traditions through movement, the use of the body as an expressive instrument in dance/extended movement idioms, and centering practice.

Expressive Movement: You’ll be introduced to various vocabularies of movement technique, such as Authentic Movement, Capoeira, Alexander, and Feldenkrais.  In class, you’ll develop more efficient and deeply expressive movement that will support the work of other courses in characterization and scene study.

This is a course of body discovery and of body-mind-heart connection, of kinesthetics and aesthetic education. Using the exploration techniques of Laban, Bartenieff, Alexander, and Feldenkreis as a framework, you’ll find new ways to create and observe the human body’s function in creative expression. The classes incorporate period movement into the kinesthetic vocabulary. This course also supports the rehearsal work of the junior ensemble.

The movement work in the course is designed to support the work of the ensemble in rehearsal for the Senior Ensemble productions.

The emphasis of this course is to develop a basic understanding of musical theatre. You will become familiar with a variety of shows, composers, and lyricists as you apply your prior voice and movement work to singing, as well as learning simple choreography and staging. During the first semester, you’ll focus on working as a unit as you learn group numbers. The second half of the year is spent exploring character development through small group numbers, duets, and solos.

An introduction to vocal exploration utilizing the principles of Arthur Lessac’s book, The Use and Training of the Human Voice, this course will teach you the basic tenets while helping you use your voice healthfully and begin to incorporate Standard American Speech.

This class explores the way to operate the voice. Enhanced awareness of the body, speech patterns, and vocal sound is stimulated. Through exercises designed by Kristen Linklater, you’ll learn basic skills of diaphragmatic (centered) breathing, muscle strengthening, relaxation, and placement of the vibrated voice.

Once again, Lessac’s system is employed, but much more intensely.  Importance is placed on how the voice is used, not only in every day conversation, but also as applied to characterization.

This course provides for continued study of Kristen Linklater’s techniques and emphasizes the discovery of each student’s individual voice.

Continuation of Lessac vocal training into exploration of text.

This course is aligned with the rehearsal process for the spring production.  Topics include regional and foreign dialects, vocal transformation for specific characters, songs, and choral speaking.