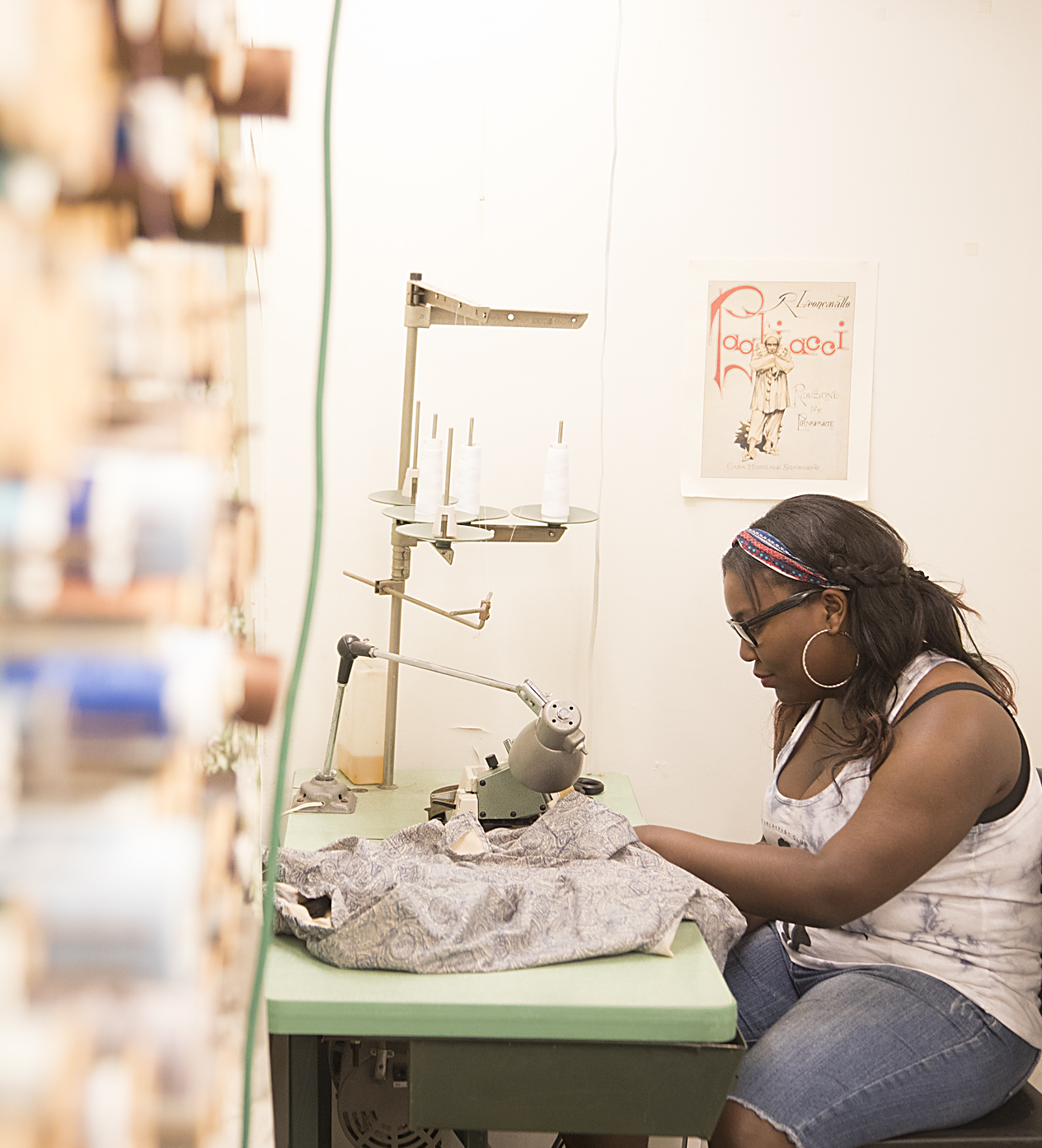 This class introduces a variety of performance skills through theater games, with the primary focus on imagination and concentration. You’ll be introduced to movement and voice production techniques and the skills of artistic problem solving. Ensemble building is also emphasized.

You’ll learn basic hand-stitching and machine-stitching skills as well as an introduction to costume design skills. You will also practice basic illustration and rendering techniques. Classwork includes handwork on costumes for current productions.

You’ll gain a basic understanding of theatre traditions and practices. In addition to learning about the history of American theatre, you’ll also learn about theatre from various cultures. The course will focus on theatre terminology, important movements, and significant practitioners of theatre.

Movement is a course of discovery, awareness, and connection. It is about being seen and being un-seen. It is about sensitizing yourself to yourself (body, breath, thought, feeling), to the presence of others, to your work with others, and to your surroundings. Other skills developed include: storytelling, using a range of texts from world literature and diverse cultural traditions through movement; the use of the body as an expressive instrument in dance/extended movement idioms; and centering practice.

Basic techniques of working on the stage and in the shop are explored. Topics covered include: knots, tool use, stage rigging, the handling of scenery, stage fabrics and drapes, electrical wiring, fasteners, glues, paint, and backstage practices. Production students work on creating the school’s stage productions, exploring organizational techniques, specialized construction methods, and many “tricks of the trade.”  They also maintain and improve the production facilities.

The fundamentals of scenic construction are explored. You’ll examine and work with a variety of building materials and tools, but especially with lumber. Sound structural techniques are presented. You’ll work on creating scenery for current productions as well as special projects.

You’ll be introduced to the process of designing physical environments for the stage. You’ll learn to draft simple groundplans and elevations, to create color renderings, and to build simple models. You will also explore principles of design: line, shape, form, color, contrast, balance and symmetry, proportion, and texture.

You’ll build on hand and machine-stitching skills and begin basic garment construction and elementary patterning. You will also explore various design concepts through original projects on assigned scripts. Classwork includes work on costumes for current productions and the opportunity for outside assistant wardrobe work.

The process of designing lighting for a production is examined. The creation of light plots, instrument schedules, and cue sheets is taught. You’ll learn to focus and to maintain lighting instruments. You will also examine what it takes to organize and produce a play.  You’ll study scheduling, production prompt books, technical plots, and cueing.

You will practice skills learned in set construction, costume construction, and stage lighting. You will also work on creating current productions as well as special projects. You’ll explore organizational techniques, project supervision, specialized construction methods, and many “tricks of the trade.” You will also maintain and improve the production facilities.

You will learn what it takes to put a production together from start to finish. This course will explore how it all comes together, from choosing a play or theme, acting styles, marketing approach, rehearsal schedule, funding sources, design and production choices, venues for production, and more. You’ll put together a “mock” play or performance and learn more about what it means to be an artist and producer of theatrical works.

You will be introduced to the ideas of historical style and production concept. Research is used to inform theater design choices.Your model-making skills will also improve. The fundamentals of scene painting are explored.

You’ll be introduced to sequential art and storytelling through moving imagery. You will explore zoetropes, flipbooks, comics, and stop-motion animation techniques, such as pixilation and cutout silhouettes. Video special effects will be introduced.

This class covers both sound design and reinforcement. You’ll study microphones, amplifiers, mixing consoles, and processing equipment. You’ll learn to mix and equalize live sound and to design simple audio systems. You will learn how to imagine, organize, produce, and edit audio files for theater productions using Pro Tools and QLab. You will also create a radio play studio.

You’ll work extensively on costume construction for theater and dance productions as teams and as individuals. You will also be introduced to draping and pattern alterations. Design and rendering projects include historical research for period pieces.

You will work on the school’s stage productions exploring organizational techniques, specialized construction methods, and many “tricks of the trade.” You’ll take responsibility for all aspects of running each show. You’ll also learn to supervise others.

This class is designed to familiarize you with plays from the classical repertoire. The plays are examined for structural features. The reading is focused on how these plays might be produced.  There is an emphasis on understanding plot and story. The distinctions between genres are also examined.

You’ll work on designing sets for scenes and plays. You will fully explore historical period, production concept, and artistic style. You will also be challenged to take into account the realities of creating scenery on a budget.

This class introduces you to the various video equipment, safe handling, and care taking. You’ll learn the technical skills to operate the equipment needed for production, as well as preproduction and postproduction skills necessary to create a narrative short film. Professional video editing and special effects software will be introduced.

You will continue construction for school productions and occasionally act as student designers and assistant designers. You will research and render costumes for period pieces as well as organize information for a production. You will practice interfacing with a director on a mock production.

The business of the performing arts is examined. Work conditions, the process of finding a job, public relations, budgeting, box office, and house management are considered. You’ll spend time examining local theater operations. The work of students on major productions is monitored and mentored.

You will work on designing sets for plays. You’ll also occasionally act as student designers and assistant designers. You will focus on how to fully realize a design in an actual physical production.

You will be introduced to advanced video editing and special effects techniques. You can work on assigned or independent video pieces. You will also learn about the special requirements for designing projections for use in live performance events.