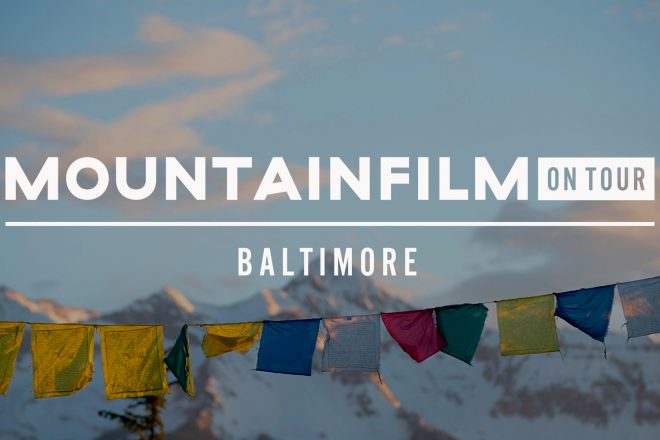 Mountainfilm on Tour is coming to Baltimore, bringing a selection of culturally rich, adventure-packed, and inspiring documentary films curated from the Mountainfilm Festival held every Memorial Day weekend in Telluride, Colorado.

Sponsored by the Saul Zaentz Charitable Foundation and back by popular demand!

No Man’s Land gives a detailed, on-the-ground account of the 2016 standoff between protestors occupying Oregon’s Malheur National Wildlife Refuge and federal authorities. What began as a protest to condemn the sentencing of two ranchers quickly morphed into a catchall for those eager to register their militant antipathy toward the federal government. During the 41-day siege, director David Byars was granted remarkable access to the inner workings of the insurrection as the protestors went about the daily business of engaging in an armed occupation. No Man’s Land documents the occupation from inception to its dramatic demise and tells the story of those on the inside of this movement – the ideologues, the disenfranchised, and the dangerously quixotic, attempting to uncover what draws Americans to the edge of revolution. Director David Byars will join us and host a Q&A after the film.

Come ready to be delighted, challenged, and inspired! This two-hour program will feature a collection of the shorts from the 2017 Mountainfilm Festival. The folks from Mountainfilm will be here to introduce each film and to hold a Q&A following the program. Gregory Crichlow, Denver bicycle shop owner and subject of Chocolate Spokes, will also be here to answer questions.

This free festival is open to the entire community, so please join us!